I recently hit a road block with my ray tracer: cubes, cylinders, and spheres rendered fine, but there wasn't an easy way to create arbitrary shapes whose intersection and normal functions I hadn't already hard coded. Since PyRayT's end use is for optical design, at the bare minimum it needed a flexible way to create lenses and mirrors. Flipping through Jamis Bucks' The Ray Tracer Challenge, it turns out the last chapter Constructive Solid Geometry (CSG) addressed my needs perfectly! However, Buck's equations for CSG did not blend well with PyRayTs flow of rendering multiple rays at once. Today I'll be covering my own algorithm for adding constructive solid geometry to a ray tracer, as well as its implementation in Python using NumPy.

CSG In a Nutshell

An easy way to create complex surfaces from basic shapes, constructive solid geometry is based around three fundamental operations: union, intersect, and difference. Each operation acts on two shapes, resulting in a new shape that is a combination of the two. Multiple CSG operations can be chained together, creating increasingly intricate shapes while using significantly less surfaces than an equivalent triangular mesh.

What It Means for Ray Tracing

Ray tracing with CSG's is surprisingly straightforward. When a ray is interesected with a CSG object, it is really intersected with the set of surfaces that make up the object. The job of the CSG algorithm is to take those two sets of intersections and filter them out so that only valid ones remain. These hits are then returned to the renderer so it can determine the closest surface that the ray interacts with.

Writing a function to sort valid CSG hits turns out to be nontrivial. For every ray-surface hit, the function needs to determine if the hit occurred inside the opposite surface. This is easy enough for convex surfaces that have at most two intersections per ray, but as the number of intersections grows, basic methods for filtering fall apart or slow down significantly.

Writing a Function to Filter Hits

Every method I found to filter out csg intersections involved iterating over all hits in a set, and internally keeping track of two booleans that determine if the ray is inside of each surface at a given hit. By contrast, this approach operates on the entire array at once, but leverages a few assumptions about the surfaces being intersected:

There are two additional arrays we'll use validate hits: (1) a sorted array of all hits for both surfaces, and (2) an array that tracks how many surfaces the ray is inside of at each hit, called surface_count.

To create surface_count we'll do the following:

The +/-1 array is used to indicate if a hit is entering or exiting one of the two surfaces. Since both arrays have an even number of elements, every odd value of the concatenated array must enter a surface, and every even hit must exit. NumPy's where, combined with argsort and cumsum are all we need to create surface_count. Once we have that we're ready to tackle the first of our Boolean operators. 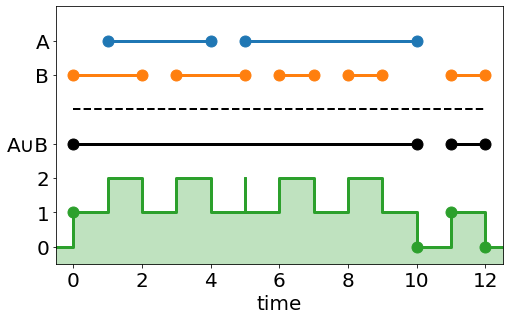 Take a look at the union operator and corresponding count values. Notice that union hits are any any index (n) where count[n-1]==0 and count[n]==1, or count[n-1]==1 and count[n]==0. This is the same as taking the exclusive or (XOR) of the array with a copy of itself shifted down by one row. From above we know that the last value of the count array has to be 0 (at \(t=\infty\) the ray must have exited all surfaces), so the zeroth row of the shifted array will always be all zeros. NumPy gives us all the function calls needed to efficiently perform xor on our count array, shown below.

A couple things from this code might pop out: (1) why specify the axis when rolling a 1D array, and (2) why does csg_hits need the same dimension as hit_array, padded with np.inf, and not just return the valid hits. Both of these are addressed in Extending To 2D Matrices. 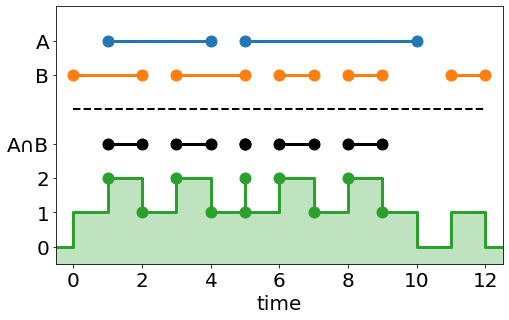 The intersection operator can be handled in a similar manner. Looking at the count array, an intersection hit occurs at any index (n) where count[n] == 2 or count[n-1] == 2. This time we'll use NumPy's logical_or function to create the mask.

The intersection operator has an interesting "blip" at t=5. This is because the ray intersects both surfaces at that time, but enters the first while exiting the second. Using integer math this becomes a 'zero thickness' shell, but it can cause unintended results when the hits are floating points and the surfaces overlap by a small amount.

The difference operator is unique from the union and intersection operator. Both union and intersection have analogs in boolean algebra, (or the binary equivalent and and or operators). Boolean algebra, however, does not have the concept of subtraction. Not only that, but we can't use the clever tricks from the count array, since we need to know which surface is the subtracting surface, and the count array only tracks how many closed surfaces the ray is inside. Rather than creating an entirely new method just for differences, we're going to redefine what a difference means so it it behaves like a boolean operation.

Don't think of A-B as shape B cutting away from shape A, think of it as the intersection of A with the infinitely large volume of space where B does not exist, called \(\bar{B}\).

Padding the intersection array with \(+/-\infty\) is unnecessary (and NumPy arrays don't like to be resized). Instead, the following observations allow us to work with the unmodified array.

With those observations in hand we're ready to create the count array for the difference operator, and once again NumPy's logical_xor will simplify the task.

Here the xor operator is inverting the array mask for any indices in the argsort that reference the right_array.

PyRayT can perform reasonably fast ray tracing because under the hood every ray is stored in a 2x4xn matrix that gets intersected with each surface. This allows me to bypass Python for loops in favor of heavily optimized NumPy functions. Fortunately, by specifying axes and preserving array sizes, the csg function can be readily extended to 2D matrices, where every column represents the ordered hits for an individual ray with the given surface.

The only thing we need to change is how the arrays are concatenated. If a 1D array is passed, they can be concatenated along the zero axis, but 2D arrays need to be stacked column-wise.

The complete function is shown below. There's an additional helper class Operation that inherits from Enum used to select which CSG operation is performed (I prefer Enums over string arguments for anything end users won't see). There's an additional argument sort_output that sets if the returned array is sorted along the hit axis. The reason for this option is to eliminate unnecessary np.sort() calls on large arrays that slow down the final program.

Before passing this function off as complete, we need to make sure it passes some basic unit tests. I'll be using Python's UnitTest framework to verify that the two hit arrays plotted above return the correct values for union, intersection, and difference.

With those tests passing, we're one step closer to a fully fledged Python ray tracer!

Constructive Solid Geometry can extend the functionality of a ray tracer by building complex shapes from basic primitives, but rendering them requires an additional step to filter out which intersections are valid. Thanks to NumPy, it's easy to write this function without reverting to Python for loops, and the same function can be used to process multiple ray-surface intersections at once.

In PyRayT, all lenses are CSG intersections of two spheres (defining the focus) and a cylinder that sets the aperture. This has sped up development time and is significantly easier than writing custom functions for each optical component. 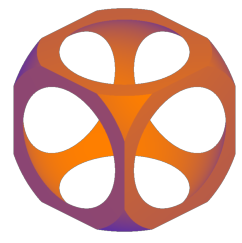 All my ramblings straight to your Inbox